We recently took a trip to Costa Rice in October, and didnt realize when we booked tickets that October is the rainiest month of the year for most of the attractions. That led us to change plans and we decided to explore the Caribbean coast of Costa Rica, where October is typically the driest month of the year. This however does not mean you should leave your rain jackets at home. There was some light rain in Tortuguero but otherwise it was mostly dry.

PS – Costa Rica requires no visa if you have a valid US visa, a multi entry Canada visa or a valid EU visa.

We decided to spend a couple of nights in Tortuguero National Park before spending a few days exploring the Carribean coastfurther south near the town of Puerto Viejo. I wanted to put down a few thoughts that weren’t as obvious to me when I was planning my trip.

We flew into Tortuguero (no cars or roads in Tortuguero) but you can take a boat. It can be a 4-5 hour ride by boat+car or a 30 min flight. We chose to fly in the interest of time. We flew AeroBell airlines which flies 12 seater Grand Caravans. They fly out of Tobias airport (NOT SJO). Tickets cost about $80 per person. Just get to the airport 20 minutes prior (website says 60 mins but we made it there with 30 mins to go and still had a lot of time) to the flight and you should be good to go.

Tortuguero airport is pretty much non existent. Its basically a landing strip with an abandoned building. And its surrounded by water. So have a water taxi ready (by your hotel) prior to arrival. We didn’t. But there was a local on the flight with us and she quickly called up a taxi to come pick us up and take us to our hotel. It costs $10 per person (standard fare but it is a bit over priced for the short journey).

The views on the flight are gorgeous though

PS – I do recommend where we stayed at, which was the Sunset Rooms hotel. Rooms were decent but more importantly they had working AC’s which were hugely helpful in the heat. Apparently AC’s are not a common amenity.

Like most of Costa Rica, people let their dogs run loose. Pretty much all the dogs are really well behaved, but its hard to tell a stray from a pet. Some of these guys are pretty hungry through, so if you can, spare some grub for them. There is a fried chicken place, across from the main grocery store that makes some really good fried chicken, and is a great place for a meal (for yourself….and maybe for the dogs too 🙂 )

I had heard that the entire park was basically cash only. There is only one ATM on the island and its not working. That part was right. The ATM was dead. However, a ton of places did accept credit cards now. You wont find every place accepting it but i would say at least half the places did take plastic which made life easier.

We flew in with no exit plan. We figured we could book our exit upon reaching here, and that turned out to be just fine. We asked our hotel to book it for us, but we also found that we could book  them directly at the docks just as easy. So we did that. We wanted to go to Moin (since we had booked a car from Moin to drive down the coast). It was simple enough to get a boat that would take us and it cost $35 per person (cash). Most places will tell you that it takes 4 hours to get to Moin, but we got there in 2 hrs 45 mins. The ride itself was very pleasant, the weather was great, the boats are small and seat about 15 people but the ride is smooth since you are going on the river, there is a pee stop mid way and its a visually beautiful ride as you go through the park. We even saw a handful of crocodiles on our way. The boat driver pointed out some wildlife etc as he was speeding by and stopped every now and then so we could take pictures. Boats leave at 10 am. 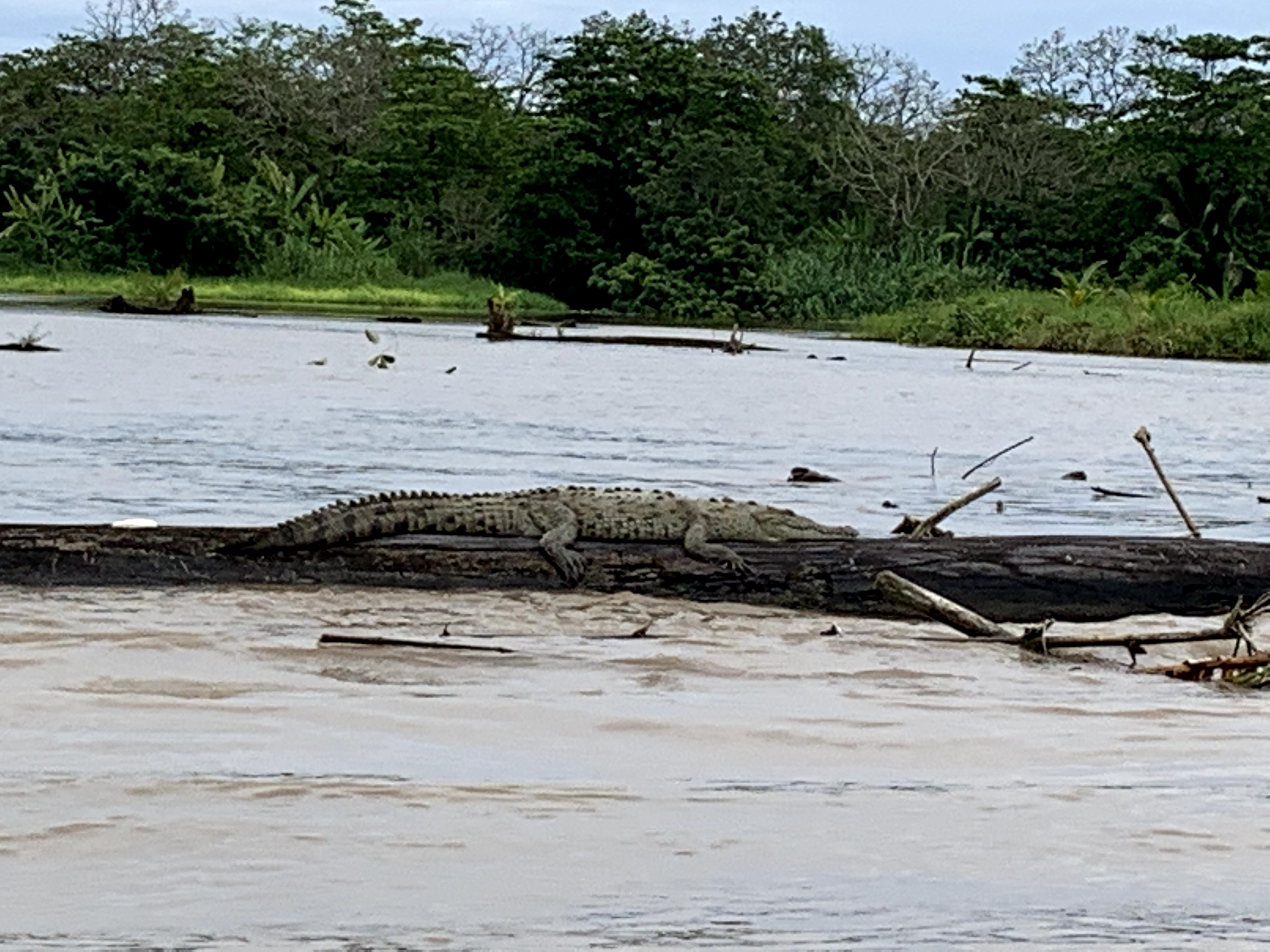 So Tortuguero is fantastic, do visit. The night turtle nesting tour is incredible. Do the ziplining here….its excellent. 2 nights should be pretty much perfect to cover almost everything. If going down south to the coastal cities, you can get a boat to drop you off between Moin all the way down to Puerto Viejo. You can also fly out if you wish but I thought the boat ride was a perfect way to go through the park as well and see some things while also getting to your destination. No regrets on that.